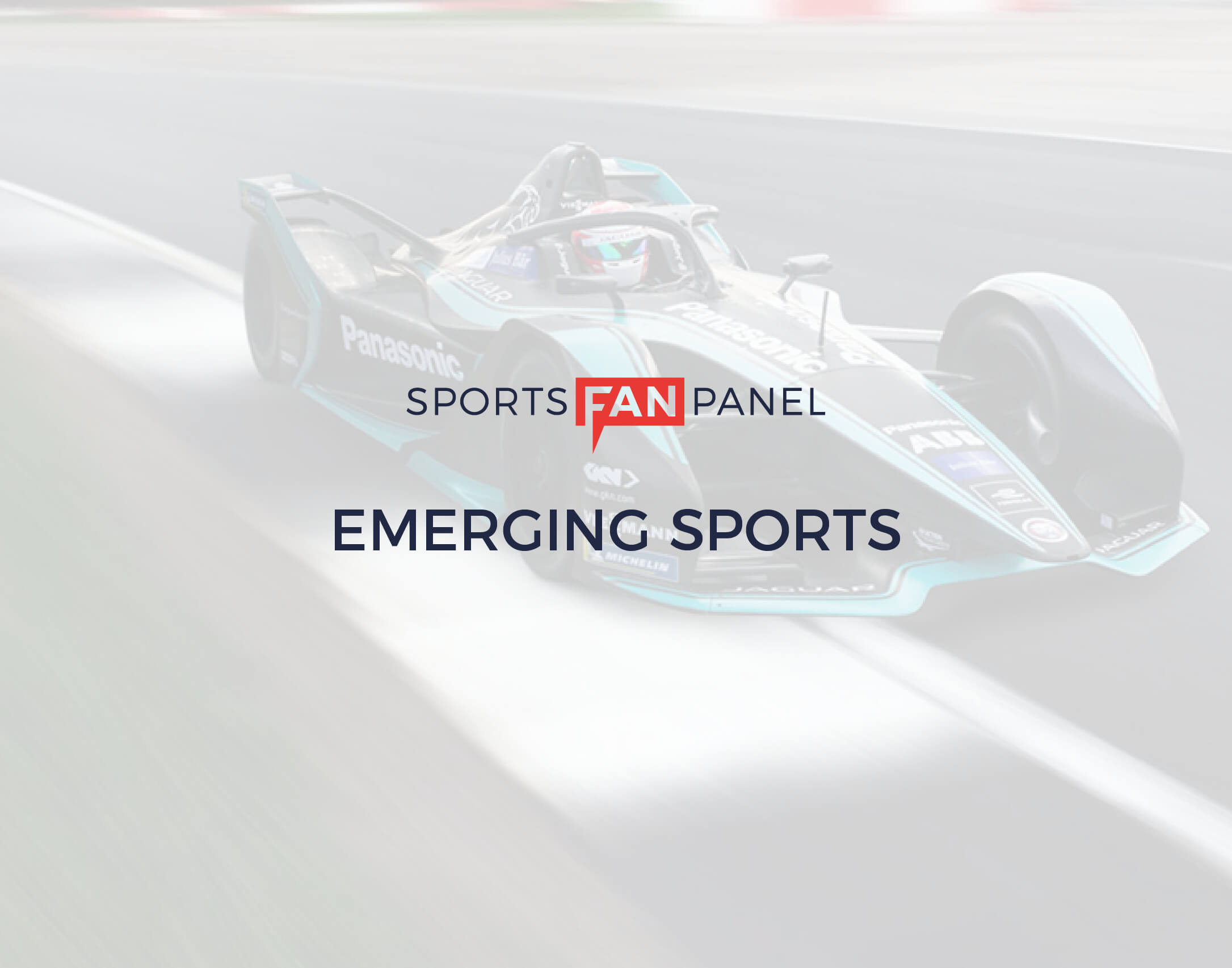 Sport has an ever changing landscape with international markets representing an opportunity for significant growth for many sports. How fans consume and engage with sports is fundamentally changing, particularly for millennials and Gen Z across the globe. This is epitomised by the incredible year-on-year growth experienced by Esports.

So, does the changing landscape allow for new sports to gain greater traction, quicker? Goodform’s Sports Fan Panel survey looked at a selection of emerging sports to understand awareness levels. The sports were selected to cover a range of different styles that are likely to appeal to different audiences.

It would appear that the Free-to-air broadcast route that Formula E has taken is proving effective in growing the sport. 54% of people’s awareness of Formula E came via TV, whilst 39% of those that know what the sport is have watched their races. The accessibility of Formula E races not only on television, but also online, puts it in pole position in an industry where being available digitally is fast becoming a factor for success.

In contrast, awareness of sports that allow people to take part in them such as Obstacle Course Racing and Ultimate Frisbee, is driven by word of mouth and social activation from those that have taken part in the sport. They represent an emerging type of sport that is built around participation, social capital and visibility on social media.

On their own, both sport and climate change make headlines, yet the impact that sport has on the environment rarely does. Despite this, 69% of our Sports Fan Panel believe reducing the environmental impact of sport to be important, and 89% and 77% agree that this should be done by reducing the use of single-use plastics and carbon emissions respectively.

This provides further explanation for Formula E’s success. The sport has saved over 300’000 plastic water bottles by using 100% recyclable water pouches, forming a part of its wider sustainability strategy. This Life Cycle Assessment is used to continuously analyse the environmental footprint of Formula E and action improvements, such as not using single-use plastics.

So, fans recognise the importance that sports try and lower their environmental impact, although, it appears that this is often not essential to increasing viewership or participation. While Formula E have attracted audiences through their dedicated sustainability strategy, 64% of the Sports Fan Panel claim this would have no impact on their likelihood to watch a sport.

Furthermore, maintaining competitiveness, quality and excitement in sport superseded lowering environmental impact for the majority of our Panel. However, it may be exciting for environmentalists, that 35% of the panel were willing to sacrifice these three core facets of sport to make a difference environmentally.

We don’t want sport to lose the components that make it, well… sport, but, it clearly has a role to play in a more sustainable future.

The shifting of the sporting landscape has quickened in the months since our Sports Fan Panel shared their views on emerging sports. The coronavirus pandemic has made a big impact and will be damaging for many sports organisations, in particular emerging mass participation events. But, it’s important to be positive during this challenging period. Will there be an opportunity for some sports to reach new audiences and new heights?

E-sports are once again our front-runner. Twitch, an e-sports streaming platform, has experienced a 40% growth in viewership between January and March. While many sports traditionalists will question the sporting legitimacy of competitive gaming, there is no doubting its popularity in recent months. It looks like captive audiences in pursuit of their sporting fix are looking online to get it.

For traditional sports it is essential to adapt to a new type of demand, and horse racing and cycling have been the quickest to react. The Grand National and the Tour of Flanders were televised this weekend, but both horse and bike were only witnessed in the virtual world. This new format may not have appealed to some fans, however, both sports will be ensuring broadcasting revenue that is key to survival at this time.

Sports not equipped for the virtual world still seek to reach the screen, which could be from behind closed doors. While this could be considered damage limitation for the Premier League, Rugby League may view finishing the Super League season as a one-off opportunity. Being broadcast with less scheduling competition could win over fans of other sports and level the playing field.

And what of the environment? The exact long-term implications of coronavirus on climate change won’t be known for some time. What is clear though, is that when there is a consensus across society that action is required, extreme measures can be established in a moment. Lets hope more than just sport-based lessons are learnt during this period.